Going green has become a way of life for the Management and Staff at Tavcor Motor Group. The Group is 100% invested in bringing about incremental change by reducing carbon footprint year-on-year in Nelson Mandela Bay.

This dedication recently saw Tavcor Motor Group again being recognised for their Solar Plant project, this time by the South African Energy Efficient Confederation (SAEEC). The Group was recognised for their outstanding contributions to the energy industry and were awarded the “Innovative Project of the Year Award”.

Tavcor Motor Group invested R5.6 million to reduce the group’s carbon footprint by generating solar power at its dealerships in Nelson Mandela Bay – Tavcor Technical Centre in North End and at Audi Centre and Tavcor VW on the William Moffett Expressway in 2019/2020. This project generates a combined 483.5 kWp from the sun and not only significantly reduces their reliance on the country’s constrained electricity supply, all excess power is fed back into the national grid.

This first of its kind project for a local business in the automotive industry, was spearheaded by their Environmental, Health & Safety Team who work tirelessly to manage, educate and to ensure that the Group continuously meet their sustainability goals.

The family managed Tavcor Motor Group, based in Port Elizabeth and George, is an award winning trend-setter of responsible business practises in the region. Tavcor Motor Group in 2018 and 2020 was the winner of the Exporters Eastern Cape’s SJM Flex Environmental Practice Award and was also awarded Blue Status in 2013 by Volkswagen Group South Africa (VWSA) – becoming the first Volkswagen dealership in Africa to receive this environmental honour.

“When we started our environmental journey 10 years ago we never could have imagined that it would be such an important path for our company. It’s no secret that the motor industry has a carbon footprint that we are not proud of but how can a small town motor dealer make a change? We couldn’t change our product so we changed how we engaged with our environment” said Megan Stow, Tavcor Motor Group Director.

Initially small changes were made at their dealerships, such as harvesting rain water and incrementally they tackled a project annually that moved them closer to being a more sustainable business. “We take it seriously – sustainability and environmental best practice are even reflected in the company values and philosophy”, said Stow.

Having operated for 70-years in the Eastern Cape, Tavcor Motor Group believe that they have a responsibility to ensure that not only is their business sustainable, but that the environment is protected.

Stow’s advice to other organisations is to ‘Just start! It is a never-ending journey but every little effort counts”. 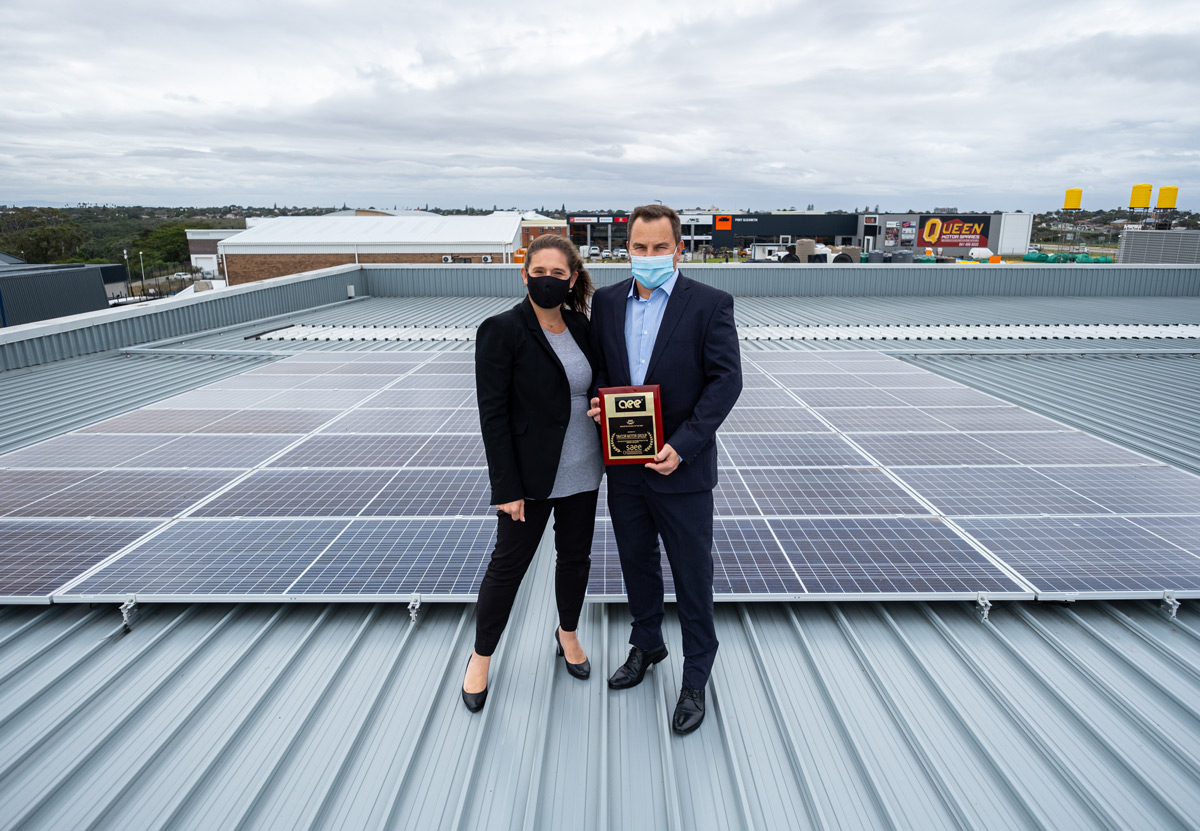 Tavcor Motor Group Environmental, Health and Safety Team together with Megan Stow, Director & Garrick Bower, CEO holding the prestigious Award. (The solar panels on Tavcor Audi’s roof can be seen in the background. (Photo attached) The solar panels installed on the roof of Tavcor VW can be seen on this photo, panels were also installed at Tavcor Technical Centre and Audi Centre.

About Tavcor Motor Group
The Tavcor Motor Group is a family managed Volkswagen, Audi and Suzuki Dealership Group in Port Elizabeth and George. The business started in 1950 as one of the first Volkswagen dealerships in South Africa and has focussed its attention on a narrowly defined area – the Eastern and South Western Cape.